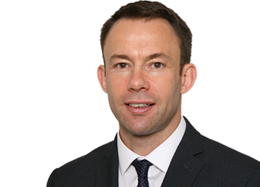 Daniel Millett is a Master Mariner with command experience.  He joined Brookes Bell in August 2014 and became a Senior Master Mariner in May 2019.  He sailed as Master with Foreland Shipping Ltd. on their fleet of deep-sea Ro-Ro vessels, carrying containers, break bulk and standard/heavy tracked Ro-Ro cargoes. During his 14-year career at sea, he served on various ship types including Ro-Ro, offshore vessels, dredgers and a bulk carrier.

Daniel spent most of his career on vessels with Integrated Bridge Systems fitted with electronic charts which enabled him to build up his knowledge of these systems and has a keen interest in Digitalisation within the shipping industry.  This had led to him preparing reports on ECDIS matters for court and arbitrations, in both the UK and overseas. Daniel supervises the MADAS software capability within Brookes Bell and has undertaken a number of electronic reconstructions using various navigational data obtained.

Daniel has provided expert opinion and acted as an expert witness at arbitration proceedings in the UK.

Daniel has carried out a variety of survey and opinion-based work since joining Brookes Bell; these are listed at the end of this CV. His particular specialisations include Ro-Ro and container stowage and securing; ECDIS, VDR and AIS analysis of collisions and groundings; piracy matters and hold cleaning disputes. Daniel regularly attends incidents on bulk carriers and is fully familiar with the operation of these types of vessels.

Daniel has attended various high-profile fire and shift of cargo casualties and provided expert reports on same. He has also written and presented lectures on the stowage and securing of Ro-Ro and Container cargoes and hold cleaning disputes.

Served as Chief Officer on anchor handling vessels, based out in South East Asia and Southern Africa. Responsible for the safe loading, discharging, securing and stability of the vessel at all times.  Carried out bridge watch-keeping duties.  This included dynamic positioning station-keeping while at offshore structures.

Served as Master on a Class 7 Ro-Ro vessel.  The vessel traded in Northern Europe including Arctic waters, Mediterranean, Middle East, East and West Africa, and the Atlantic Ocean. He regularly undertook ship-handling and manoeuvring of the vessel during berthing operations.  During this time, involved in the dry docking of vessels and ensured the vessels completed all the statutory surveys working with Classification surveyors.

Regularly traded through the Gulf of Aden while undertaking anti-piracy measures as recommended by various organisations such as the IMB and UKMTO, etc.  He is fully familiar with the latest version of Best Management Practices for Protection against Somalia Based Piracy.

Employed as Chief Officer, and responsibilities included the safe loading/discharging of the vessels in accordance with IMO Codes and stability considerations throughout the voyage.  In charge of planned maintenance for all safety equipment, cargo securing equipment and watertight doors.  Involved in the generation of the company Emergency Towing Booklet.