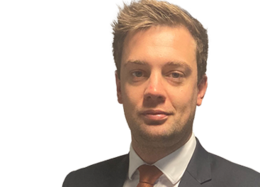 Chris Ellyatt is a scientist with a BSc (Hons) Degree in Biology from the University of St Andrews. Prior to joining Brookes Bell in 2022, Chris worked for seven years for another leading marine consultancy based in London, specialising in forensic investigation of marine cargo related incidents.

As a cargo scientist, he has extensive expertise and hands-on experience in bulk and packaged agricultural commodities, including bulk grain, feeds, frozen and fresh cargoes in Europe, North and South America, Africa and Asia. Specifically, he has comprehensive experience and knowledge with soya beans, maize / corn, wheat, bagged and bulk rice, seedcakes (including Distillers’ Dried Grains with Solubles [DDGS] and soya bean meal [SBM]), bagged and bulk sugar, coffee and other dry cargoes. Chris has also performed and managed on-site sampling and inspections of citrus fruits, bananas and fish in addition to the cause and effects of wetting and mould damage to product packaging.

Since becoming a Marine Consultant, Chris has worked on a wide variety of vessel types, including geared and non-geared bulkers, reefer vessels, container ships and barges. He has also performed many inspections and sampling operations in shoreside facilities such as warehouses, processing facilities, factories, container yards and silos. Typical issues that Chris has dealt with have included wetting, mould growth, self-heating, fumigation issues, fire and explosions, cargo liquefaction, physical and biological contamination, mycotoxins, infestations, inherent vice, quality issues and shortage. Chris is familiar with the sampling protocols of many commodities, including those of GAFTA, ISO and FOSFA, often advising clients on analysis methods and interpretation of results.

Furthermore, Chris has experience in authoring expert reports and has given evidence as an expert witness during court proceedings in China, ultimately contributing towards a favourable judgement for his client. He believes in providing clear, productive and pragmatic advice to his clients and presenting the details of a situation in a concise and accurate manner to achieve practical outcomes.

Survey and consultancy examples include, but not limited to: