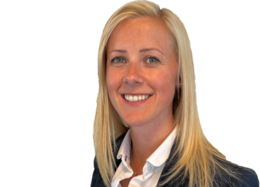 Karley Smith is a Master Mariner and Dynamic Positioning Operator (DPO).  She joined Brookes Bell in June 2022 after working for 11 years in the Offshore Oil & Gas sector and latterly sailing as Chief Officer in the private superyacht sector.

Previously, Karley worked as a Deck Officer and DPO, completing charters for both the Renewable Energy and the Oil & Gas sectors. As a DPO she worked on projects involving wind farm construction, operations and maintenance, subsea construction, supply, survey and ROV operations, saturation diving and deep-water drilling, accumulating over 6000 DP hours.

In 2020, Karley diversified and joined a new build project for an exploration 140m motor yacht. She led the Bridge and Navigation equipment commissioning and acceptance tests, which included ECDIS, oversaw the sea trials and was involved in the preparation for the initial Flag State and Class surveys, including the Passenger Ship Safety Certificate. Karley has recent experience working on a variety of vessels where ECDIS was the primary means of navigation.

Since 2015, Karley has worked as a part-time Lecturer at Fleetwood Nautical College in the Blended Learning department.

After completing her Deck Officer cadetship training, she was awarded the Maritime and Coastguard Agency’s Officer Trainee of the Year Award for 2010 and subsequently attained a First-Class Honours Degree at Liverpool John Moores University.

During the yard period of the build, Karley developed the vessel’s SMS including emergency response and bridge procedures. As the responsible Officer for Bridge commissioning and customer acceptance tests, Karley sailed as Navigation Officer following the delivery of the superyacht, responsible for familiarising Officers with all Bridge systems including ECDIS.

As Safety Officer, Karley was responsible for all safety related aspects including conducting crew training and drills. Karley later sailed as Chief Officer, assisting in the management of two major maintenance and refit periods, including drydocking.

Karley sailed as a DPO on Class 3 drillships off West Africa and South America. Responsibilities including monitoring the vessel’s Fire and Gas system, responding to and initiating emergency procedures, coordinating and controlling all vessel movements within the 500m zone, along with all helicopter arrivals and departures from the vessel. Additionally, Karley assisted with the workscope during the 5-yearly Special Purpose Survey (SPS).

Served as a Second Officer DPO on DP Class 2 and 3 vessels during saturation diving, ROV operations and survey touch-down monitoring for pipelay operations. Karley was also Navigation Officer and in addition, assisted with the workscope during the 10-year drydocking of a multi-purpose ROV vessel.

Served as Second Officer DPO on various DP Class 2 multi-purpose and platform supply vessels worldwide, as senior bridge-watchkeeper, navigating officer and ship security officer. This also involved operating both dry and wet bulk cargo systems during operations with offshore installations and alongside in port. Karley later covered the Chief Officer position during the drydocking of a multi-purpose vessel.

Karley carried out all duties associated with the job responsibilities of a Second Officer. Additionally, she was employed to write the drydock report for the vessel’s docking at Belfast Harland and Wolfe ship repair yard.