Modelling fire risk and smoke dispersal on an Offshore Platform 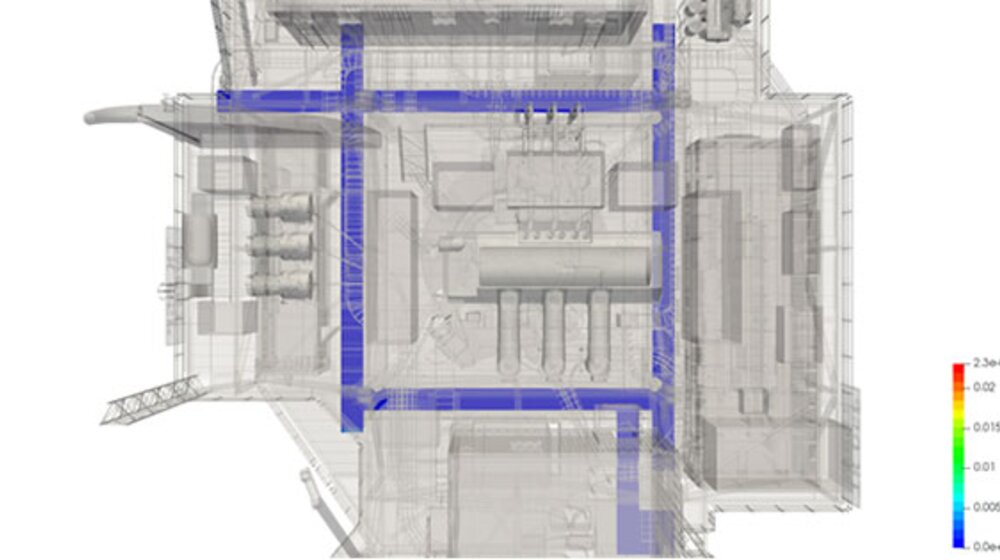 Nick Doherty, Senior Mechanical Engineer has been using computational fluid dynamics (CFD) to examine fire risk and to model smoke plume dispersion across the decks of an offshore platform.

As part of the assessment, Nick performed a CFD analysis for two fire scenarios, examining the smoke dispersion for both possibilities and the likelihood of the smoke impeding safe evacuation from the offshore platform (OSP) in the event of a fire.

The client provided the OSP’s 3D geometry, orientation, and environmental details for the analysis.  Six wind angles for each fire scenario were analysed according to the yearly wind distribution for the platform.  The environmental details were derived from a wind rose for two OSPs in the close locality, which gave a graphic tool showing how the wind speed and direction were typically distributed at each location.

Nick explains: “To estimate the properties of the smoke emanating from the 1m2 diesel pool fires we used a Fire Dynamic Simulator (FDS).  FDS is a computational fluid dynamics (CFD) software developed by the National Institute of Standards and Technology (NIST) that solves numerically a form of the Navier-Stokes equations suitable for low-speed, thermally-driven flow, with an emphasis on smoke and heat transport from fires.

“We built an FDS model, which consisted of approximately 1.52 million hexahedral cells of 0.05 m in all three dimensions.  We included a 1m2 diesel pool fire in the model and the properties of the diesel fuel source used in the model were referenced from United States Nuclear Regulatory Commission (USNRC).  We then applied an equation from the SPFE Handbook of Fire Protection Engineering in order to calculate the heat release rate of a 1m2 diesel pool fire.  The ignition and subsequent burning of the diesel pool fire was also modelled, and the temperature and velocity of the smoke was calculated from the solution once it had reached a steady state of burning.

“Because of the complexity of the OSP geometry, FDS was not used to track the smoke movement from the different fire scenarios across the OSP.  Instead, ANSYS Fluent, a general purpose CFD software was used with the application of a species transport model to examine the smoke dispersion over the OSP.”

The ANSYS Fluent model consisted of approximately 24 million hex-dominant cells.  The calculation was solved to a steady state applying a k-epsilon turbulence model with gravity and full buoyancy effects.  Solving to a steady state means that the concentration of the smoke no longer changes with time.  With the smoke dispersion model being solved for the maximum heat release rate of the fire this means the smoke concentration was calculated for the fully evolved fire and smoke condition for the fire scenario.

A total of six wind angles relative to the OSP were analysed, and the wind speed applied for each analysis was taken as the median value of the Weibul distribution of one of the OSPs, with a sea environmental wind profile applied to vary the wind speed for height above sea level.

As a result of the CFD and FDS, Brookes Bell was able to provide a comprehensive analysis and conclusions, outlining the effect of smoke dispersion on the safe evacuation of the OSP.  Each evacuation route was assessed together with the implications of the wind angles of each fire scenario, allowing the client to plan for any fire incident and structure their fire evacuation procedures accordingly.