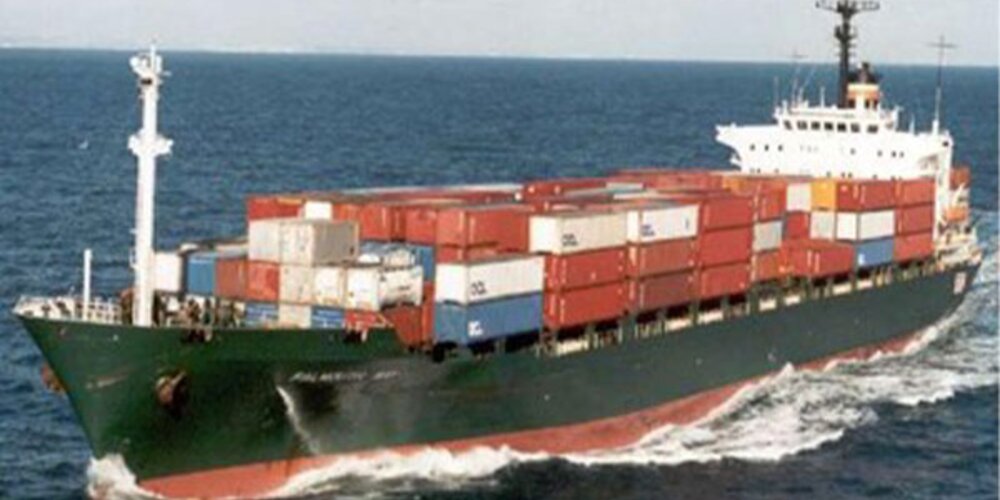 Beginning life as the Marestar, the M.V. Falmouth Bay was a container ship that had been built by Ishikawajima Harima Heavy Industries in Tokyo for Marester Reederei GmbH & Co KG.

This considerable bulk was pushed through the water by a 6-cylinder 2 SCSA Sulzer diesel engine that, with its 13,300 bhp, could propel the vessel to a service speed of 18.30 knots.

The M.V. Falmouth Bay may have been launched in July 1978 as the Marestar, but by the time it was delivered in December 1978, it had been renamed as Seatrain Trenton (later names would include Falmouth Bay, Orient Winds, Mosel Express, Strathbora, Luck River, and of course Falmouth Bay).

It was under the name Seatrain Trenton that the vessel began its operational life. It would happily carry out its duties for just over a year until it was sold to Overseas Containers Ltd in September 1980.

With the change of owners, came a change of management. In February 1981, management of the Seatrain Trenton was transferred to Container Fleets Ltd, with the vessel being simultaneously renamed Falmouth Bay.

By June 1981, management of the vessel was transferred directly to Overseas Containers Ltd.

Overseas Containers Ltd (OCL) was a consortium of British shipping companies that had been formed in 1965.

The genesis of OCL had been the advent of containerisation. Containerisation, although leading to savings in the medium to long term, required significant investment in vessels and infrastructure.

In order to ease this financial burden, many shipping companies banded together into consortia.

OCL was the result of a partnership between British and Commonwealth Shipping, Furness Withy, P&O, and the Ocean Steamship Company.

The consortium proved to be a success, and by the early 1980s OCL had cemented its position as Europe’s largest container-through-transport operator. It was this growth that had necessitated the addition of the Falmouth Bay to its 20-strong fleet.

OCL’s fleet of container vessels - including the Falmouth Bay - was easily recognised thanks to their green hulls, white superstructure, and green funnels bearing the initials OCL in white letters.

OCL also adopted a common naming convention for its fleet, with all ships’ names ending in the word ‘Bay’.

Modifications to the Falmouth Bay

It was whilst the Falmouth Bay was being operated on behalf of OCL that it was modified to increase its capacity.

In August 1981, the vessel was sent to be lengthened. It returned to service in September 1981.

For a number of years following its modifications, the Falmouth Bay operated without incident, traversing a route between Asia and North America.

The voyage would typically include stops at the following ports:

It was a route that was regularly travelled by many other vessels without incident.

But, in late-March 1984 disaster would strike the Falmouth Bay.

Severe weather east of Japan had been reported, with weather fax surface pressure charts confirming this to be the case.

However, the Falmouth Bay was ‘weather routed’.

According to former 2nd Officer (Radio), John McKay, who was onboard the vessel at the time of the incident, the Falmouth Bay’s weather route was provided by a company called Ocean Routes.

As per John, “we had to follow their advice even though onboard information indicated severe problems but what did we know, someone had probably paid thousands of dollars for this service, so it had to be right, right?”

In response, the official log of the ship indicates that the crew reduced engine revs to save load on the main engine. At the same time, wind force increased from force 9 to force 11, and the barometer fell rapidly. The vessel was also pitching heavily at this point.

To give you an idea of the scale of the storm that Falmouth Bay found itself in, force 11 - under the Beaufort Sea State Scale - is considered to be a violent storm, with: ‘exceptionally high waves (small and medium-sized ships might be for a time lost to view behind the waves). The sea is completely covered with long white patches of foam lying along the direction of the wind. Everywhere, the edges of the wave crests are blown into froth. Visibility affected’.

There is only one higher step on the Beaufort scale - force 12 - hurricane.

The ship’s official log shows that for the remainder of the 21st, the Falmouth Bay and her crew were consumed with their battle against the sea.

And, thus it continued. Hour after hour.

However, there was a strange occurrence during the evening’s 8-12 watch, when all the lights on the foc’sle came on of their own accord…

It was shortly before midnight that water was found in the side passageways.

The onset of the 22nd March didn’t bring any reprieve.

The ship’s log reports that at 01:10 the Falmouth Bay was ‘in steep mountainous seas, heavy swell wind force 12 and hove to.

Complete power failure occurred due to ingress of water down the side passageways after container movement at No.1 hatch had ruptured deck plating and, it was later discovered, sheared a ventilator into the underdeck side passageways. Water leaked into the main engine room via the port passageway door and rendered the vessel’s only 440/220V transformer out of action’.

With no 220V supply, the main engine now had to be operated manually from the local manoeuvring stand.

At this point, the Falmouth Bay was in serious trouble.

The ship’s log reports - ‘Distress message sent on 500kHz immediately (using the lifeboat radio, as the ship’s main antennae were earthing due to being encrusted with salt spray), but no response received at 01:15. Main engine power restored in emergency use only, no gyro facilities available, vessel steered head to wind’.

A degree of relief came at 01:40, when Choshi Radio, Japan accepted and relayed the Falmouth Bay’s distress signal.

But, the crew and the vessel weren’t out of danger yet.

With the ship’s distress signal registered by authorities in Japan, the ship’s log reports that the crew took the opportunity to carry out an inspection of the damage to the ship. ‘It was established that the port and starboard passageways were full of water caused by said passageway vents forward of the main deck being completely sheared off by containers shifting at No. 1 hatch’.

There was also, ‘rupture in the main deck itself, also caused by shifting containers. Vessel still hove to, steering with difficulty head to wind into mountainous seas and pitching heavily’.

For a few hours, the ship continued to battle the seas, until at 03:40, things became considerably worse…

At 03:40, the containers immediately forward of the bridge sheared their lashings and fell to starboard, causing severe damage to other containers and causing at least one container to pitch overboard.

The Falmouth Bay continued to pitch and roll heavily, causing further containers to be flung overboard.

Despite being ongoing for several hours, the storm’s strength was undiminished, with the ship’s log book reporting force 11/12 winds at this point.

By 11:45 however, visual contact was made with a Japanese search and rescue aircraft. Radio contact was also established with the Shimbei Shu Maru, which proceeded to head towards the Falmouth Bay.

Fast-forward to 13:32 and the Shimbei Shu Maru was on station approximately 150 miles away. However, she couldn’t get closer for fear of losing containers herseld. Despite being hove to, the Falmouth Bay continued to roll violently, leading further containers to be pitched overboard.

As morning dawned on the 23rd March, the crew of the Falmouth Bay decided to attempt some remedial measures to the ship.

An attempt was made to remove the manhole covers to the No. 4 wind ballast tanks to allow side passageway water to be drained into them and then pumped overboard. By 10:45 this had been achieved, however the Falmouth Bay continued rolling and pitching heavily in force 9 winds and a heavy, confused swell.

By 16:24 the decision was made to turn the vessel stern to wind and attempt to proceed to Japan.

Three days of tumultuous sailing followed. Accompanied by the Japanese search and rescue vessel Tsugaru, the Falmouth Bay finally arrived safely at Tokyo No. 1 International Container Terminal as its port of refuge.

A telegram sent by the Falmouth Bay’s Master, John Fee, tells the tale succinctly, highlighting, with alarming levity, how dangerous the incident had been:

restored before she broached and we survived *stop* The main deck is an awful sight though no doubt your own experiences on AOTEA will be enough *stop* We lost 80 boxes overside 10 are just about to go at least 100 severely damaged foremast bent aft main deck holed in three places one hatch lid holed no rails left *stop* I really should have stuck to flute playing or selling Yamaha pianos best regards yourself John”.

Following this incident, the Falmouth Bay was eventually repaired and restored to service, having been renamed Orient Winds.

A further name change came in 1984 to Mosel Express, before the ship was renamed to Falmouth Bay in 1986.

The Falmouth Bay’s owner OCL was subsequently acquired by the Peninsula and Oriental Steam Navigation Company (today’s P&O Freight) in May 1986.

Following another four years of operation, the Falmouth Bay was sold to Golden Island Shipping Co Ltd in Hong Kong, where it was operated until April 1999 when it was broken up at Alang in India.

The tale of the M.V. Falmouth Bay is a sobering one.

It’s a stark reminder that even in the mid-1980s, when advanced seafaring and navigation methods were becoming ubiquitous, and when shipping companies were paying for advanced ‘weather routing’ services, disaster could be just over the next wave.

Thanks to the efforts of the crew, the M.V. Falmouth Bay lived to see another day.

The story of the M.V. Falmouth Bay isn’t an isolated one. Every day ships navigate the seas and oceans of the globe to bring us the foodstuffs, goods and materials that make our modern lives possible.

That we know so much about the M.V. Falmouth Bay is due to Brendan Cuffe - the Director of Brookes Bell UK, and Neil Gardiner - Brookes Bell’s Managing Master Mariner actually being on board during the incident.

So, when we talk about Brookes Bell’s multi-disciplinary team having hands-on, real-world experience, we really do mean it. It’s thanks to the experiences of people like Brendan and Neil at sea that Brookes Bell is able to grapple with, and understand, the complexities of life onboard and how casualties unfold in real time at sea.

If you’d like to tap into this experience for yourself, then speak to Brookes Bell today.